For 25 years Jewish and Palestinian citizens of Israel in a group known as Women in Black have held a  protest vigil against the occupation every Friday at a busy intersection in West Jerusalem. 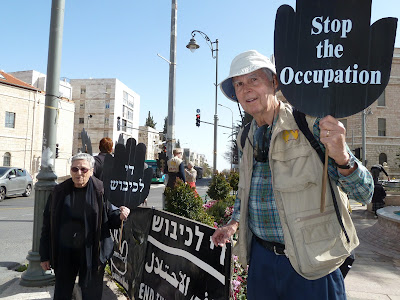 We join this demonstration, because EAPPI shares the goal of ending the occupation. On this Friday there were a dozen women in black, one man in black, and 6 EAs (including some from placements outside Jerusalem). The woman next to me is Dafna from Detroit, who emigrated to Israel in 1951. She has been with Women in Black from the start in 1988. She told me, "I don't believe in ruling another people. Jews are trying to take over all the land, not just the part they were given in 1948." 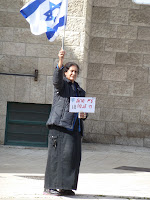 Across the street stood a woman with an Israeli flag and a sign reading "Israel forever," the only counter protester.  Some people driving by made obscene remarks or gestures against us, or simply honked, but there were no confrontations. No soldiers or police were present. But the reaction was not uniformly hostile. One orthodox man walking though the plaza with his wife and child said "I appreciate what you are doing."


Three EAs then went over to a demonstration in front a house on the west side of Sheikh Jarrah where a family of 10 will be evicted to make way for expanding Jewish settlements on March 1 unless the Supreme Court grants the family's final appeal. Mohammed Shamasneh lives there with his wife, parents, and children. He said they are refugees driven from the west entrance of Jerusalem in 1948, and "if the Jews come  back here, we want to go back to our lands, too." If his family is evicted, it will a precedent for others in the same street, which is on the west side of the road to Ramallah.

On east side of the road, 66 Palestinians, including 24 children, have been evicted since 2008 to make way for Jewish settlers.  More families have received eviction orders, according to area resident Mohammed Sabagh, who briefed us in his home.

For four years the families in Sheikh Jarrah have been holding a non-violent protest demonstration every Friday against the settlement takeover.  It takes place in a small park on the road to Ramallah. When I observed it, there were about 85 people--a larger turnout than usual, because many had come from the nearby demonstration at the Shamasneh house. There were even some of the Women in Black there.