On the way to the humble tents of the Bedouins, we drove through the lush and illegal Jewish settlement of Ma'ale Adummim, a posh community of 40,000 that has no shortage of water. In fact, Bedouin advocate Angela Godfrey-Goldstein told us the settlement uses up to eight times as much water as nearby settlements, and is a veritable oasis of well irrigated palm trees and ancient olive trees taken from Palestinian farmers.

Angela says "There never can  be peace unless the settlers leave."

We drove a few miles down the road to the poor Bedouin village of Jahalin, which is struggling to survive against settler harassment and ongoing threats of forced displacement. What a contrast! 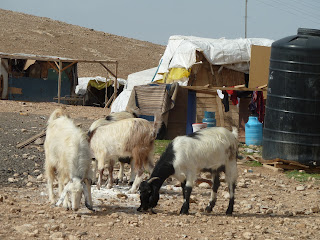 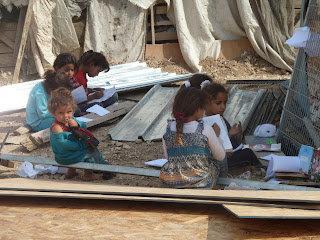 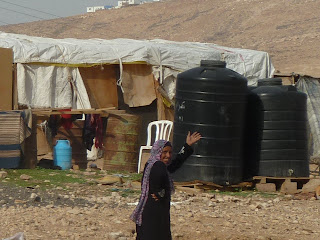 Village leader Eid Abu Hamis told us that water and grazing land are critical for his people, whose only source of income is their animals. They used to have 1,600 sheep and goats (plus a few camels), and now are down to 140 to support their 22 families. When settlers closed access to springs and wells, the Bedouin illegally tapped water pipes for a while and now have an arrangement to pay for water from the company. Every year the settlers move their  boundary closer to Jahalin, and they have killed and maimed Bedouin children with booby traps and instead of accepting responsibility, made the parents pay fines for trespassing. 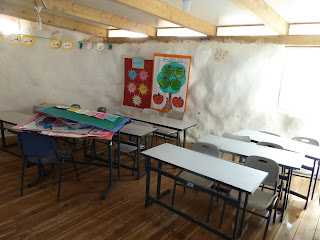 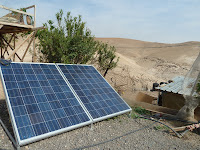 With international help, the community has built a beautiful school from tires and mud, and installed some solar panels to supplement its generator for electricity. Obviously they would like to stay where they are, but their days may be numbered. Eid says the High Court has temporarily blocked the army's order to displace them to Jericho, but it could be reinstated and carried out at any time. "If you take a Bedouin out of the desert, you kill him."

We learned more about refugees and internally displaced persons from BADIL, the Resource Center for Palestinian Residency and Refugee Rights. Amjad Alqasis told us that last year the Army destroyed one village 22 times, but the Palestinians kept rebuilding it because they had nowhere else to go. He says Israel has a "silent transfer policy," displacing a few hundred people at a time so as not to call attention to it. 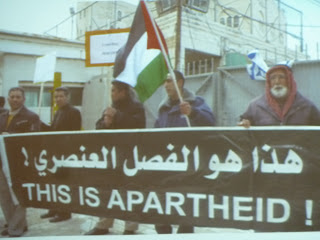 Amjad says Israel has no law prohibiting discrimination, "because the whole legal system is racist and discriminatory." Israeli citizens who are Palestinians are treated inferior to Israeli nationals (Jews) according to 25 different laws.

Amjad sees signs of hope: people are using the term "apartheid" to describe the situation more and more, and South Africa, Denmark, and Sweden have started labeling products made in illegal settlements. He thinks the boycott, divestment, and sanctions movement is critical for ending the occupation.

That is also the view of the Rev. Mitri Raheb, pastor of the Christmas Lutheran Church in Bethlehem and one of the authors of the 2009 Kairos Palestine appeal of Palestinian Christian church leaders to the international community.  He says "We call for non-violent creative resistance to free the occupiers from the occupation, and BDS is the tool."

Mitri's church is the base of the Diyar Consortium, which serves the whole Palestinian community with emphasis on children, youth, and women.

This was our last visit with the Interfaith Peace-Builders delegation. Tomorrow I am off to visit a Palestinian Christian family in northern Israel.