Daher Nassar welcomed us to the "Tent of Nations," his family farm perched on a hill surrounded by Israeli settlements. I admire the family's steadfastly resisting legal efforts and harassment intended to drive them off the land to put up more settlements. He has documents proving his grandfather purchased the farm in 1916. "The farm is like my mother, and I won't sell my mother," he says, recalling that would-be buyers invited him to name any price. When settlers destroy one of his trees, he plants 10 to replace it. He planted 1,000 trees last year. 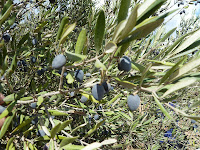 Since this is an "olive harvest" delegation of Interfaith Peace-Builders, we harvested a few olives. Daher's father, a minister, taught him to love all people, and the aim of Tent of Nations is to build bridges. They had 5,000 visitors last year, including German volunteers who installed a solar power system.

Daher's sister Amal, a nurse in Bethlehem, says once when they were taking grapes to sell there, the grapes were spoiled before arrival because they were delayed five hours in the sun at an Israeli checkpoint. She says the Tent of Nations teaches mothers alternative medicine, handicrafts, and how to transform pain into creativity through poetry. "We refuse to be enemies," she says.

Steadfast resistance also came through loud and clear at the Deheisheh Refugee Camp, administered by the UN, which is home for 12,000 Palestinians in Bethlehem.

The director of the Palestinian Youth Action Center for Community Development at Deheisheh, Naji Odah, says "We keep struggling. Nobody can give you freedom; you have to earn it." Naji showed us a film in which a 10-year-old refugee, Tamar Faraj, said poignantly, "Why am I not free and why is my country closed?" He longs to visit the sea. Half of Deheisheh's population is under age 15.

Naji's wife Saheir says when the checkpoints are active, it can take more than 3 hours for what is usually a 45-minute ride to her job as a dietitian in a Hebron hospital. Women in labor die at the checkpoints. Saheir and Naji's mother cried all night after a released prisoner told them about deplorable conditions where Naji was imprisoned for six months in the Negev Desert. She says, "We are not terrorists; we have rights to live in our country. The Jews can remember the Holocaust, but they do not allow us to remember the Nakba [when 700,000 Palestinians were driven from their homes in 1948]." She favors a one-state solution with freedom for all.


Two young Israeli professionals have a different narrative. They say Palestinians "fled" back in 1948, and that a two-state solution is the best option for peace. They agree that it is not in Israel's best interest to continue the occupation, but in their view the two countries might not be friends for 50 years. "Peace is not loving each other, it's divorcing each other," they told us. One who was nearly killed by a suicide bomb says he doesn't like the separation wall, but "it's a necessity." Their parents taught them that everybody is out to kill the Jews, which helps me to understand their need for security.